It has been a strange time in my culinary journey. Most of the restaurants I’ve visited recently have been decent, and to be honest, it’s tough to write about restaurants that were just ‘alright’.

There’s only so many synonyms for unremarkable, and I don’t think anyone really cares to read about mediocrity.

Thank god the Prairie Noodle Shop is here to shake things up. 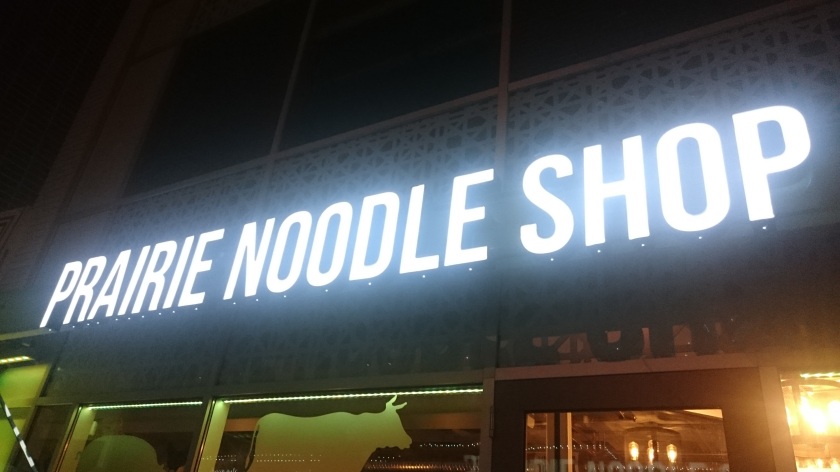 After a few successful appearances as a pop-up restaurant, the Prairie Noodle Shop has officially opened its doors to the hordes of ramen deprived Edmontonians.

I went last night and was greeted by ten or so patrons-to-be crowding the tiny entrance, waiting for a seat. As I had a party of 5, we were looking at a wait of roughly 40 minutes. Considering the diminutive size of the restaurant and the hype from the grand opening, this wasn’t unreasonable.

While I stood in line, I had a chance to observe the machinations and efforts of the staff (not like I had anything better to do). Four or five convict-looking types run the open-concept kitchen behind the bar… You know, so you can watch people assemble a bowl of fucking noodles.

I also had the chance to admire the furnishings in the restaurant. Prairie themed wood cut-outs of grain silos and barns line the walls, while the ceiling was exposed to show support beams and aluminum ventilation. Combined with the mild paint job, incandescent lighting and bits of cowhide glued to the wall, the restaurant felt warm and inviting, especially on a cold winter night.

I wasn’t kidding about the cowhide

We ordered at 6pm and it turns out that they had ran out of most of their appetizers, including the pork buns and drumettes (they only had one order left). Batter for the cornbread was also running low, so we stuck with one order of ‘smoked lollipop drumettes’ and the ‘charcoal salted edamame’.

What came out actually made me feel some remorse towards the chickens that died so we could try the dish.

Here, I’ll post the description on the menu and we can go through it item by item. 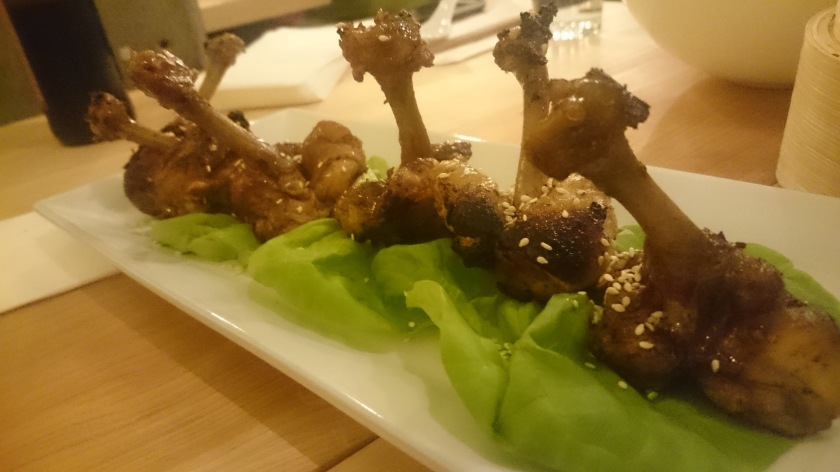 First of all, the chicken was just cooked poorly. Disregarding the ‘confit’ for now, the drumsticks were bone dry and absolutely flavorless (besides some minor charring). How did this happen? I don’t have a fucking clue. The drumstick is probably one of the easiest cuts to cook, but they somehow fucked it up.

Judging from the menu description, the only seasoning is the honey and barley tare sauce. There was a faint hint of sweetness, and the barley effectively did nothing. Honestly, what did you expect from using cereal as a condiment.

The edamame wasn’t bad, but you get the same thing with a bag of frozen edamame from T&T and a lemon. If I were to gripe, I could complain about how the seasoning wasn’t distributed evenly and how the pods at the top were over-seasoned and the bits at the bottom were flavourless, but why would I ever do that?

But at the end of the day, you go to a noodle shop for their noodles.

Surprisingly, the pork was actually really well done. The pork shoulder was moist, flavorful and rich, and the belly managed to maintain a level of firmness while still rendering the fat on top with a bit of light charring. 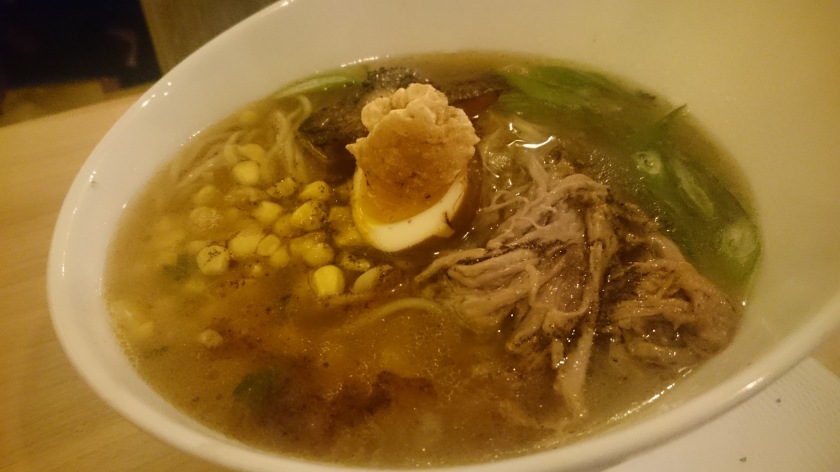 Unfortunately that’s just about everything that went well with the dish. My first taste of the broth brought up mental imagery of boiled, slightly-rancid shrimp shells. The menu says the base is made from home-made pork broth and “prairie dashi”, but I couldn’t detect any of the lingering umami you would normally associate with pork bone, and the dashi only tasted of slightly-off crustaceans. To top it off, the soup was about as bland as the chicken drumsticks.

The noodles came out glued to each other, and each bowl would have three to four gigantic clumps of noodles that had fused together. Besides the obvious unpleasantness of biting into a giant lump of undercooked dough, this only accentuated the underlying theme of blandness.

I tried some of the chicken broth as well, and had a similar impression. Little to no chicken flavour combined with slightly-off seafood and a complete lack of salt.

To top it all off, both orders of chicken ramen were missing the fried kale. Not like that would add much, taste-wise, but it still blows when you order something and part of it just isn’t included. 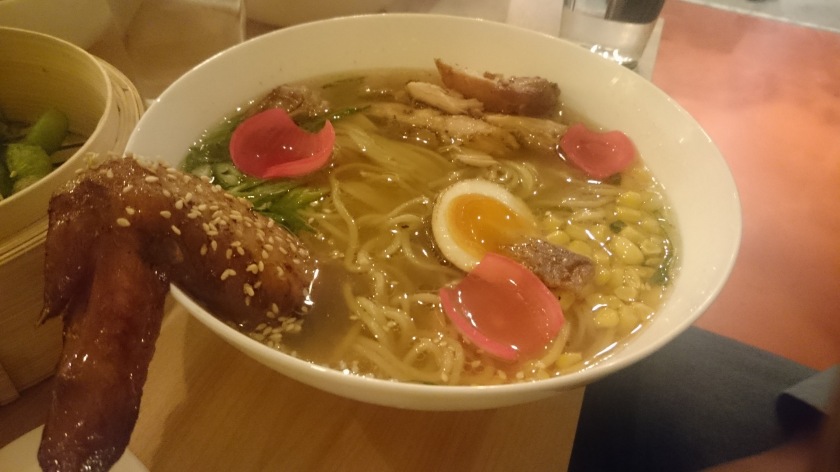 The umeboshi egg (preserved plum boiled egg) was cooked nicely, with a rich, soft yolk and firm white, but the boiling liquor may have been too strong, as the egg was very salty.

I understand that there’s a dinner rush and the restaurant is new, but if you have four fucking cooks in a restaurant that seats 40, there’s no excuse for sloppy cooking, technical errors, and running out of ingredients by 6pm.

3 thoughts on “The Prairie Noodle Shop”